The recent cold spell is expected to ease over the next couple of days, where the UK will bask in temperatures that are above average. But a fresh deep freeze is predicted to strike by the end of the week and linger until early March over a 14 day period. The latest weather models from WXCHARTS show temperatures plummeting later this month, with Scotland bracing for ferocious lows of -8C as cold northerly winds sweep over from Scandinavia.

Gavin Partridge from GavsWeatherVids explained Britain could be battered by wet and windy weather as this week progresses, before the cooler temperatures head in.

He said: “The cold spell ends today but not before central and northern regions have another spell of snow and/or freezing rain and ice. By tomorrow all places will be a lot milder and rapid thaw of snow and ice will commence.

“Sunday is off to a dry start across much of the country but there is patchy freezing rain and snow across north east Scotland with showery rain through Northern Ireland, Wales and south west England. 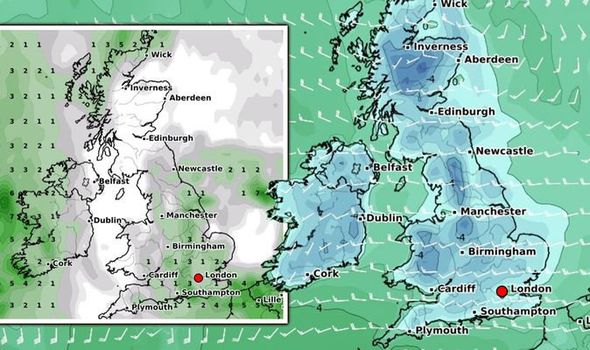 “Through the day we’ll see showery rain pushing eastwards with a risk of more freezing rain and ice as well as snow in the north – snow most like over high ground with freezing rain at lower levels. In the south it should just be rain although the south eats may stay dry until this evening. Western regions will turn drier later.

“Temperatures will still be cold in the east at just 2C (36F) but western regions will be much milder with 12C (54F) possible for Northern Ireland.

“Tonight outbreaks of rain continue in the south and east while the north and west turns drier. It will be a milder night than many recent nights with a thaw of snow and ice commencing.

“Tomorrow rain will clear away from the south east quite quickly and most places will have a dry day with a few bright or sunny spells but also quite a lot of cloud. Patchy rain is possible in the north west. Milder for everyone with snow and ice thawing away. 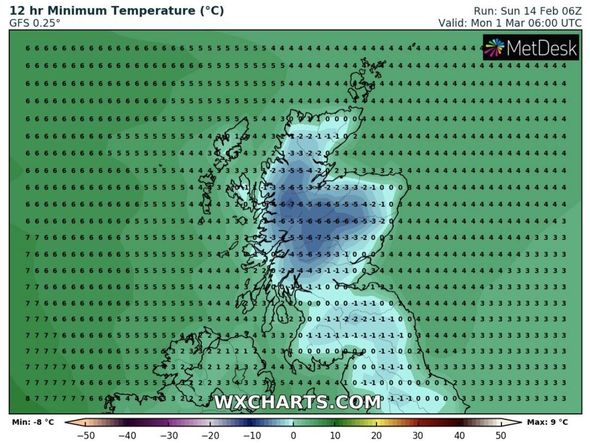 “Cloud and outbreaks of rain push eastwards across the country on Tuesday followed by sunshine and showers. Temperatures should be relatively mild.

“Thursday should be a drier day ion the north and east but southern and western regions are likely to turn wet and windy. Slightly cooler with temperatures around average.”

The BBC’s long-range forecast warned of high pressure from Scandinavia bringing cold temperatures to the UK towards the end of February.

The forecast said: “For the final week of February, high pressure is expected to continue to be the main driver in the weather pattern across Europe. 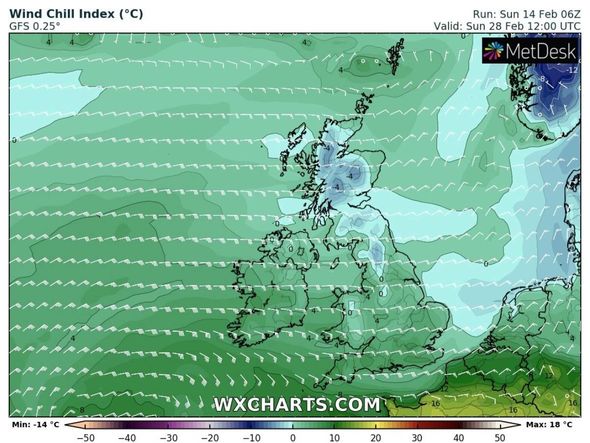 “However, there is some uncertainty on where exactly it will end up. As the high shifts through north-east and eastern Europe, this will tend to keep things colder and drier than normal for us in the UK.

“The main issue is that if the high pressure centre is too far east, low pressure will be able to creep in from the southwest, bringing mild and wet weather.

“There are three possible scenarios we think could play out. The first is that high pressure is nearby in Scandinavia and keeps things drier and colder than normal with winds mainly from the continent out of the east or south-east.

“The second is for high pressure to still be north-east or east, but too far away to influence us. This would be similar to the coming week in mid-February, with milder, wetter weather throughout the UK. 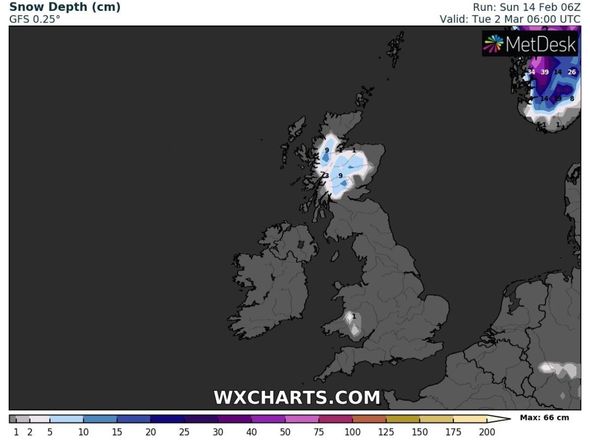 “The final pattern is that we end up in a battleground between the colder and milder air, with western areas noticeably warmer and wetter than the dry, cold conditions in the east.”

The Met Office added snow could even return by March due to another cold spell.

The forecast between Sunday, February 28 and Sunday, March 14, said: “Into late February there is a signal for higher than average pressure to sit close to or over the UK, with likely drier and more settled conditions prevailing. Temperatures are likely to return back to around, if not below-average with a slightly greater chance of cold spells during this time, bringing an increased threat of widespread frost and a very uncertain chance of snow.

“Towards mid-March, there are signs of returning to a more unsettled period, with milder interludes more likely once more.”