BBC Weather: Parts of Europe to be hit by 'lively' showers

The UK has recorded one of the wettest and coolest Mays in modern history, but that’s all set to change as we head into June. Temperatures are expected to peak on Friday, reaching 28C for London and at least 25C for much of southern and central England, according to WXCharts.

The forecasters also said parts of the north-west will see temperatures as high as 27C near Liverpool and Manchester.

On Friday, most of England and Wales will see temperatures in the mid-20s, with only coastal areas slightly cooler.

The warm period will begin tomorrow, with 22C expected near London and 20C in the West Midlands and East Anglia.

On Tuesday it will be even higher, WXCharts expect, with 23C in London, 22C in the north-west and 21C in parts of East Anglia. 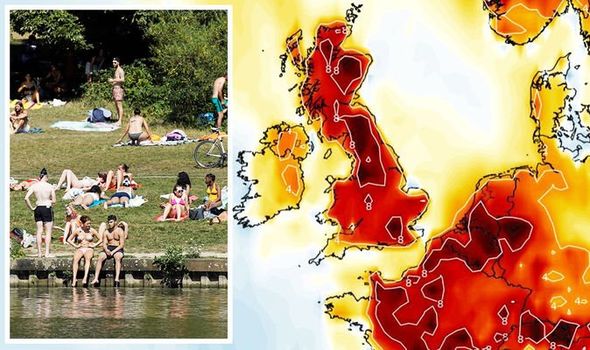 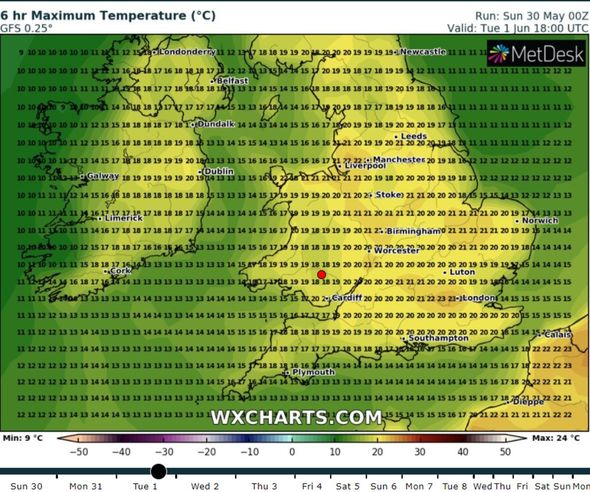 Wednesday will see highs of 25C in the capital and 23C in Liverpool and Manchester with Thursday a degree or two higher still.

Then Friday’s hot conditions will hit before temperatures slightly cool off.

He said: “Finally the weather’s settled down and it’s going to last for at least the next few days. 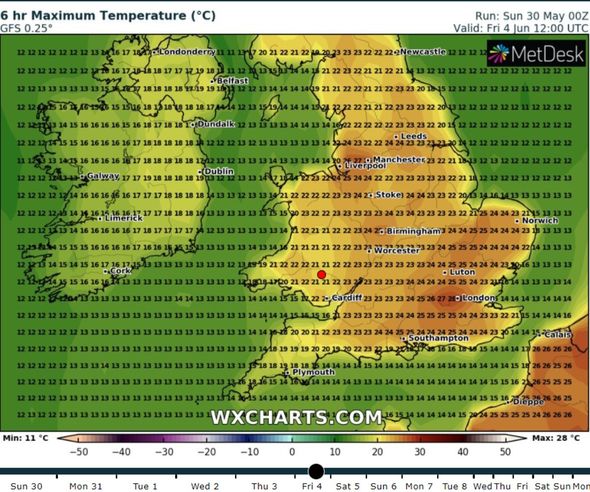 “Warm and sunny weather lasting into Bank Holiday Monday and you can see the warmth has spread across the UK.

“Temperatures will probably peak at around 24 or 25 degrees Celsius come Monday or Tuesday.”

Most of Britain will see fine weather on Monday, though some clouds may linger along the east coast.

Mr Schafernaker forecast: “North Sea coasts with an onshore wind could be, at least in one or two areas, a little on the cloudy side and maybe fare weather cloud building in the afternoon elsewhere. 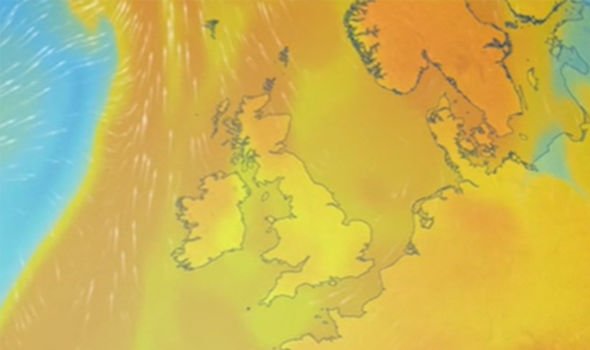 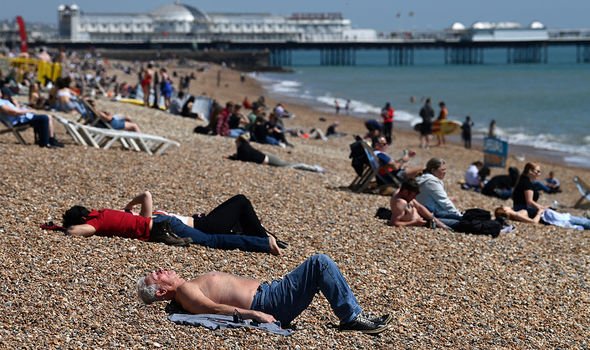 “Look at the temperatures: 23 in Liverpool, 22 in Glasgow, not far off 20 degrees in Northern Ireland as well.”

Tuesday will see similar conditions with “light winds and sunny skies” across the UK.

Temperatures are expected to peak around 23-24C in southern England, with these conditions potentially extending into the midlands.

However, Wednesday will be cooler with more cloud and potentially some thunder.

BBC Weather: Temperatures to hit 25C in parts of the UK

Mr Schafernaker said: “Then it all changes. “Low pressure is headed out way, but this low pressure is not coming out of the north Atlantic, it’s coming in from the south so it will be a warm area of low pressure.

“At this stage we think the weather will go downhill but temperatures still into the 20s.

“The low pressure is very close to the UK, or right on top of it, come Thursday.

“Quite a few isobars there so it will be fairly breezy out towards the south-west of the UK and there will probably be quite a few showers around. 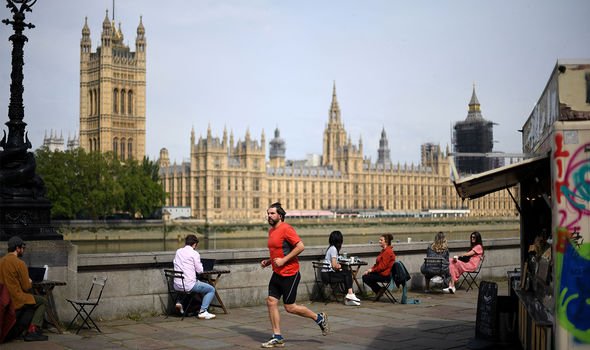 “If the forecast holds to this patten it looks as though eastern countries, all the way from Scotland to the south-east, should have the best weather on Thursday.”

Temperatures of 23C should be expected for much of England, potentially rising to 24C for Kent and Essex.

However, Cornwall will be cooler, and could see readings of 13-14C.

The coldest weather will be off the top of Scotland, where the thermostat might fall to 11C.