High pressure is expected to shift around northern Europe over the coming days, bringing hot air towards the UK for a 72-hour heat blast. The latest temperature models from WXCHARTS show temperatures nearing 20C over a three day period from Friday, April 23 to Sunday, April 25. Northern parts of England including Leeds and the Yorkshire dales could see highs of 16C tomorrow, while London and Kent in the south east will see 14C.

The south-east could see more warm weather on Saturday and Sunday, with highs of 14C lingering, before cooler air returns on Monday.

Terry Scholey, a forecaster at Netweather, added temperatures could even climb to a sizzling 19C in north-western regions tomorrow.

But he added the warm spell is unlikely to last long before more wintry weather hits next week.

He said: “Our anticyclone remains in charge on Friday, so you can expect more of the same on another fine day, with lots of sunshine once early frost, mist and patches of fog have cleared. 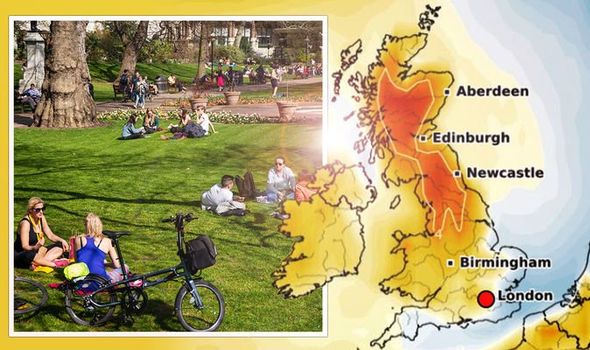 “The Northern Isles should also see an improvement, with mostly just a little fair weather cloud by the afternoon for most parts.

“It becomes pleasantly mild again, even quite warm for some in the West and North West, with top temperatures mostly between 14 and 18C but up to 19C in the warmest spots.

“Winds remain mostly light, but an East or North Easterly breeze across the South and South-West will continue to be fresh and gusty across The Channel Islands.

“A fine evening in most parts is followed by a dry night with clear spells. 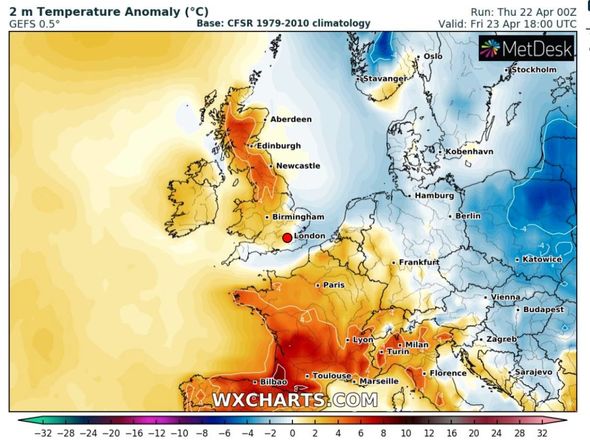 “It’ll turn chilly again after dark, with patchy mist, fog and a slight frost reforming overnight, especially from Wales and the Midlands northward, where winds will continue to be light winds.

“It continues mostly fine and dry into the weekend with further sunny spells, but we’ll be entering a period that’s renowned for late wintry spells.

“And with the prospect of winds turning into the North again, it’ll become colder by day.

“There’ll also be some showers into next week that could even turn wintry on northern hills.” 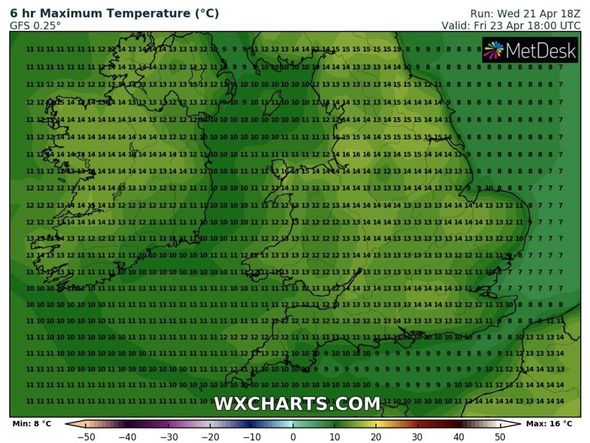 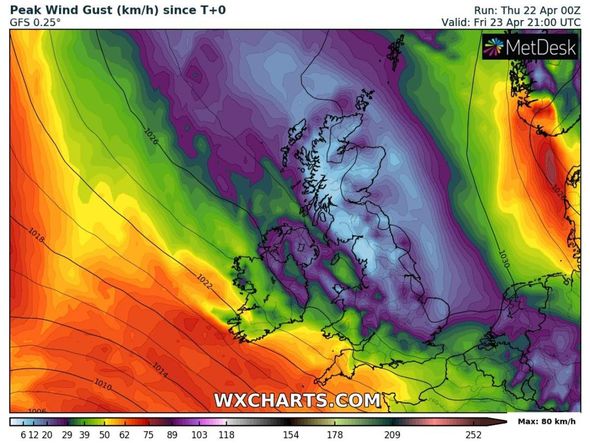 Brian Gaze at Weather Outlook added the whole of Britain could bake this weekend as temperatures could hit 18C in many regions.

He said: “High pressure will keep virtually the whole of the UK dry through the rest of the week.

“Temperatures rise quickly during the days and in the afternoons it will feel pleasantly warm. Next week things may begin to change.

“Tomorrow it’s a case of rinse and repeat, with all of the UK having fine weather. 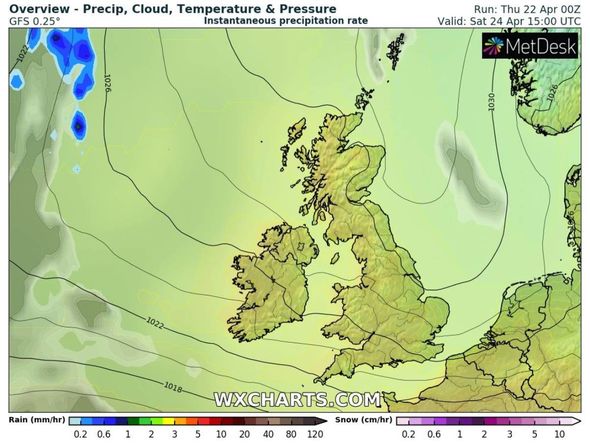 “Temperatures recover quickly after the chilly start. In the afternoon 18C (64F) could be reached.

“Through the weekend high pressure keeps it settled, but isolated showers may move up from the southwest.”

The Met Office’s forecast for this weekend also predicted that sunshine should grip the nation this weekend.

It said: “Friday will be dry and sunny across most of the UK with temperatures a little higher than Thursday. Settled and dry; sunniest/warmest in the west, cooler in the east with more cloud at times. Windy in extreme southwest, otherwise winds light. Rain probably arriving in far north Monday.”