Temperatures reached as high as 28C across the UK today as members of the public flocked to parks and beaches following the easing of lockdown restrictions by Prime Minister Boris Johnson. The mercury reached as high as 28.2C at Santon Downham in Suffolk, beating a temperature of 26.2 in London’s St James’s Park on Wednesday.

But on Friday, western parts of the UK will receive patchy rain before it heads towards the northeast.

However, across the southeast of England, the Met Office said there was a risk of thunderstorms with heavy rain and gusty winds.

This, however, should generally clear by the afternoon leading to sunny spells and the potential for temperatures to reach 27C across the region.

Rain is expected to be the heaviest in parts of the Scottish Highlands and Snowdonia reaching up to 50mm while the rest of the country can expect between 10mm and 20mm. 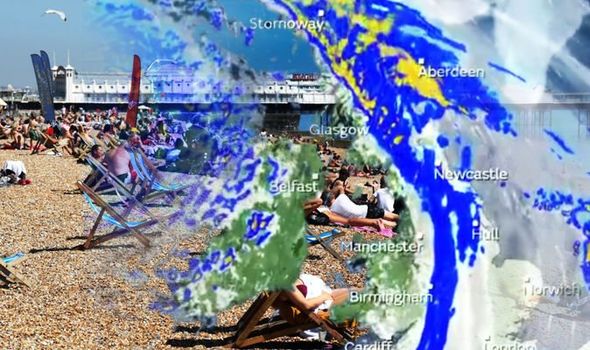 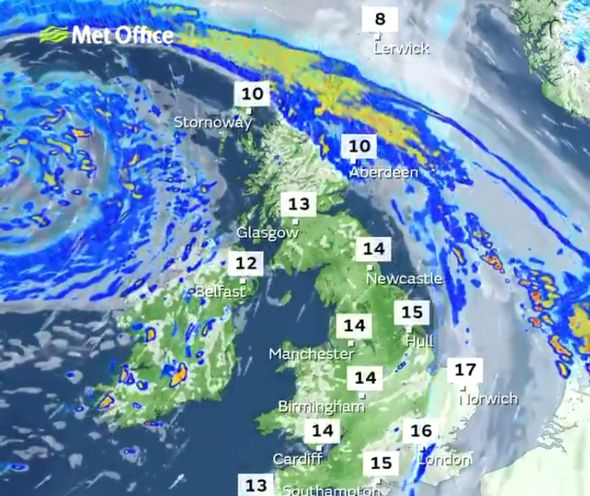 Deputy Chief Meteorologist, Matthew Lehnert, said: “Friday will be a cooler and more unsettled day for most as an Atlantic low-pressure system moves to the northwest of the UK, replacing the warm air we’ve had for much of this week with fresher westerlies.

“This system will bring a spell of strong winds and a risk of gales to northern and western parts of the UK, with gales of 50 to 60mph possible for parts of north Wales, northwest England, Northern Ireland and western Scotland.

“A wind warning has been issued for Northern Ireland.

“Along with strong winds, some rain is expected followed by showers, heaviest across north-western parts of the UK.” 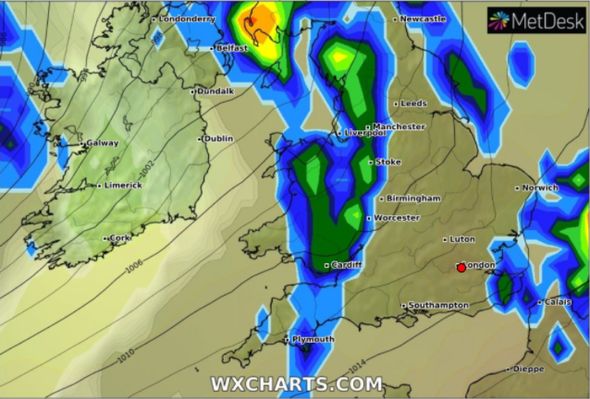 The warm conditions over the last few days have tested the nation’s resolve in maintaining social distancing in parks and open spaces as police issue pleas to tourists to stay away.

Under the new rules, people can drive to beaches and countryside beauty spots, where they are allowed to picnic and sunbathe.

Police in North Devon said roads to the area’s beaches were “gridlocked” despite pleas to the public from councils who advise against travelling to the southwest.

They say “valuable resources” were being used to marshal traffic, adding that elderly people in the area would be “very anxious over the selfish actions of these individuals”.

DON’T MISS:
Lockdown POLL: Is the lockdown failing after beaches were packed? [OPINION]
Britons FURIOUS as social distancing rules flouted on beaches [REVEAL]
Britons urged not to head to the beach during sunny weekends [REVEAL] 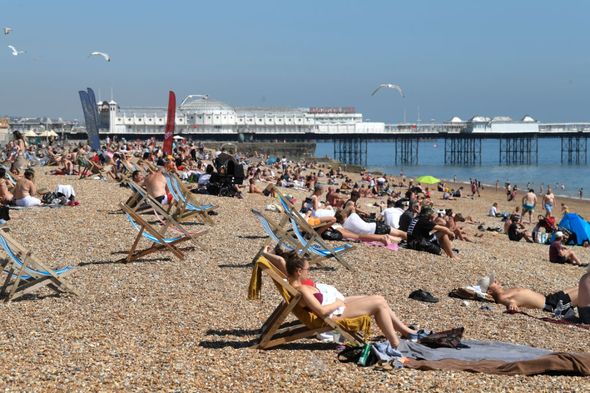 Meanwhile, councils and tourism bodies encouraged people not to travel more than an hour from their local area to enjoy the outdoors and to avoid popular tourist locations, as many car parks, toilets and hotspots remain closed.

But while tourists flock to beaches, James Mason, chief executive of Welcome to Yorkshire said it was crippling businesses because of lockdown restrictions.

He said: “It’s been a challenge, people are going out of business.” 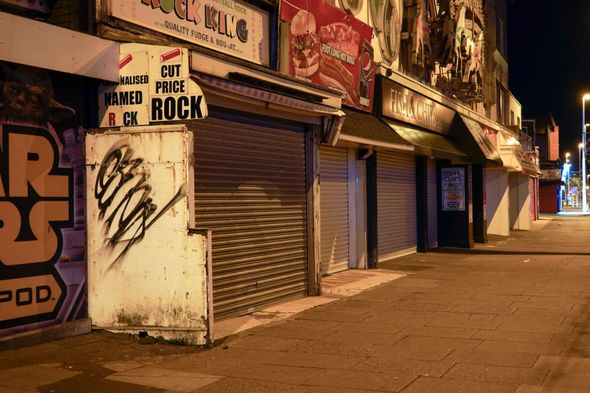 Temperatures are expected to cool on Friday, according to the Met Office and should drop to normal for this time of year, to between 16C to 18C.

Later on in the week, it is expected to be a windy start to the weekend with sunshine and showers for many, with the weather gradually turning drier from the south on Sunday and into bank holiday Monday.