The cause of the gas explosion that levelled three homes has not been determined, but two people are confirmed dead. 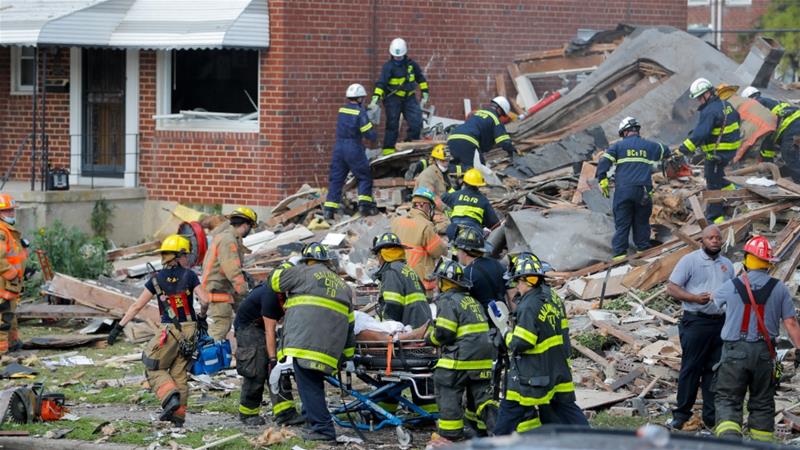 Baltimore Fire Department spokeswoman Blair Adams said Tuesday morning that a man was pulled from the debris shortly before 1am (05:00 GMT). A woman had been pronounced dead at the scene shortly after Monday morning’s explosion. Seven others were hospitalised, five in critical condition, Adams said.

The conditions of the other two were still being determined, she said.

More than 200 people in the neighbourhood were affected by the blast, and about 30 have been in temporary shelters since the explosion, Adams said.

The natural gas explosion Monday morning levelled three row houses and ripped open a fourth, trapping people in the debris and scattering shards of glass and other rubble over the northwest Baltimore neighbourhood of Reisterstown Station. Dozens of firefighters converged on the scene to free the injured.

Last year, a gas explosion ripped the facade off an office complex in Columbia, Maryland near Baltimore, affecting more than 20 businesses.

No one was injured in the explosion early on a Sunday morning. In 2016, a gas main break forced the evacuation of the Baltimore County Circuit Courthouse. Under Armour Inc had to evacuate its Baltimore office after a gas main break in 2012.

Baltimore City Council President Brandon Scott said he needs “the entire city of Baltimore right now to focus on hopeful prayers for those individuals that have been impacted by this”.

“I want everybody in the city really to rally around those individuals that are still fighting for their lives,” Scott said at a news conference.