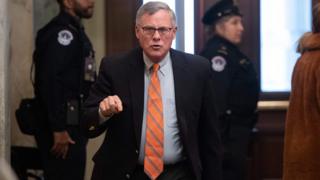 The US justice department is investigating alleged insider trading by lawmakers who sold stocks just before the coronavirus pandemic sparked a major market downturn, according to US media.

Republican Senator Richard Burr is said to be among those to have been contacted by the FBI.

It is illegal for Congress members to trade based on non-public information gathered during their official duties.

He has said he relied solely on publicly available news reports.

Mr Burr, of North Carolina, reportedly dumped up to $1.7m (£1.45m) of stocks last month, which has led to calls for his resignation.

His lawyer, Alice Fisher, said the senator welcomed the investigation, saying it will “establish that his actions were appropriate”.

“The law is clear that any American – including a Senator – may participate in the stock market based on public information, as Senator Burr did. When this issue arose, Senator Burr immediately asked the Senate Ethics Committee to conduct a complete review, and he will cooperate with that review as well as any other appropriate inquiry,” she said in a statement.

On Friday, Mr Burr tweeted to say he “spoke with the chairman of the Senate Ethics Committee this morning and asked him to open a complete view of the matter with full transparency”.

Republicans Kelly Loeffler and James Inhofe, as well as Dianne Feinstein, a Democrat, also reportedly sold holdings before the downturn.

They have all denied any impropriety and it is unclear if they will be contacted in this probe, which is being carried out in conjunction with the US Securities and Exchange Commission.

The Department of Justice told the BBC it would not comment on the investigation.

As chairman of the Senate Intelligence Committee, Mr Burr receives nearly daily briefings on threats to US national security. Details of his financial filings emerged via an investigation by ProPublica.

On 7 February, shortly after the first case of coronavirus was reported, Mr Burr wrote on Fox News that the US government was “better prepared than ever” to tackle an outbreak.

But a week later, when President Donald Trump assured the public that the virus would not hit America hard, Mr Burr and his wife sold between $628,000 and $1.72m in stocks, including shares in two hotel groups. Two weeks after that, he privately warned a group of wealthy constituents about the dire economic impact of coronavirus. He told the group to curtail their travel, according to the speech obtained by NPR.

At the time, the Trump administration was publicly downplaying the threat.

Several of the stocks that Mr Burr sold, including in the hotel and travel industry, have since lost value.

A shareholder in one of the companies – Wyndham Hotels and Resorts – sued Mr Burr in federal court on Monday, accusing him of misusing his access to information, according to Politico.