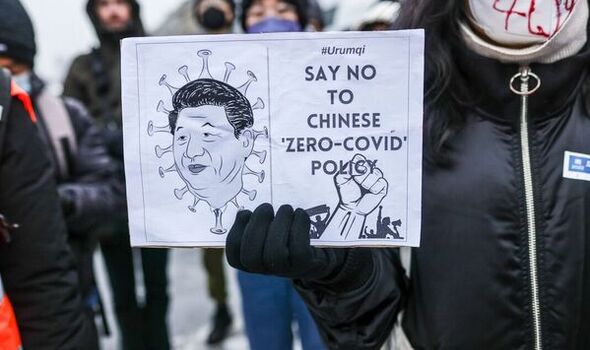 Moves by China’s ruling Communist Party to finally loosen a draconian “zero Covid” policy follow more than 50 protests in the last week across the country in what is being called the “White paper revolution” – where young people are holding up protest signs without wording to signify lack of freedom of speech.

In a significant shift, protests have included overt calls for Xi – fresh from a successful 20th CCP National Congress where he secured himself another term in office – to step down.

The unexpected policy vault-face by Beijing partially anticipated an expected increase in protests in the run-up to International  Human Rights Day on December 10.

“XI had a choice: sustaining a lockdown meant entire tranches of China not being allowed to participate in the Lunar New Year which, for many, is the only time in the year when they see family. This would have  increased tensions considerably,“ said US China expert Dean Cheng.

“So he has decided to roll the dice in a shift in policy which also carries many risks.  Not only does it make him appear weak, but it will allow people moving from one region to another to share their experiences  of corruption, inconsistencies, of people being welded into apartments. These are no longer abstract problems.”

“This means that Xi’s hope that blame sits with local administrations evaporates. It becomes a national problem, a party problem and, because he rejected the collectivism of his predecessors by concentrating all power on to himself, a  Xi problem.”

He added: “What happens when Covid begins to spread? In China, everyone’s phones have these COVID detection applications which aren’t likely to be turned off, so you’ll still have people setting off Covid alarms. Will the government still be able to quarantine people, as they did at Shanghai’s Disney resort? And what happens if this follows the roll out of China’s eight vaccines, which many are reluctant to take?”

“This decision to ease restrictions may alleviate pressure for the CCP in the short term, but there’s more pressure to come.”

According to research by Shanghai’s Fudan University, Xi’s preference of containment over vaccination, which has left China’s population without any herd immunity, could result in a death toll exceeding one million pensioners and vulnerable people – a humanitarian catastrophe not seen in China since the Great famines 40 years ago.

And, despite the government blocking of mobile networks and comment sections in social media platforms like Weibo, it will be difficult to cover up.

“These protests are nationwide, and Xi’s biggest priority right now is to establish how, despite  all the internet controls in place, the videos are getting out,” said Cheng.

“There is a hole in the Great Firewall of China and it raises fundamental questions as to whether local authorities, which are taking the brunt of these protests despite following CCP policy, are complicit.”

Though it has just recently captured international attention, Covid protests have been ongoing for months, prompted by a series of events.

These include a fire in Urumqi, Xinjiang, which killed 10 people in a building that had been under lockdown for weeks, a bus crash killing 27 people being taken to a so-called “Quarantine facility” in Guizhou province, the decision to lock down a large part of Shenzhen city over a handful of cases.

With sudden lockdowns having already dented the confidence of foreign investors, protests have now moved beyond disaffected youth to factory workers which may impact key Chinese exports of things like electric vehicles.

But draconian Covid measures is just the latest of a series of shockwaves to have dented popular confidence in the CCP.

The bursting of a speculator real estate bubble – which saw the price of apartments increase so much that they now take 50 years of average earnings to afford, and over-leveraged developers insist on mortgage payments a year before construction was completed – has led to 330 homeowner groups across 100 cities stop paying, resulting in a £250bn shortfall.

A further 400,000 people have been denied access to savings following a series of bank runs in Northern China, with those  protestors dispersed after  the deliberately false activation of their Covid apps, which would find them facing harsh punishment if found to be outside their homes.

With youth unemployment now running at 20 per cent, two movements have emerged  – Tang Ping, or Lie-flat, and Bai Lan, or Let it Rot – with disaffected youngsters stating that there seems little point in running  the rat race or working hard.

While most experts believe Xi is safe for now, he is “running out of runway” , said Cheng.

“You have a leadership whose crisis-fighting resources are already stretched. Even if he gets through the Lunar New Year, he doesn’t have much space to manoeuvre.”

“One more crisis, such as a humanitarian disaster, wouldn’t be the last straw to break the camel’s back, but the bale of hay.”

“The social contract is broken. There is no safety net for families, no employment opportunities for graduates, and  -despite efforts by the CCP to raise the birth rate –  young people forced to look after their parents don’t want their own children because they just can’t afford to have them.”

“’China is facing a crisis as bad as the end of the cultural revolution. And if any one plank doesn’t hold, the rest will fold.”